Many of us within the holistic healing profession take chakra energy centres for granted. There is no reason to doubt their existence. However, have you ever researched the origins and the theory and philosophy underpinning the chakras?

I have often questioned many inconsistencies between chakra systems as represented by various authors; however, I have finally found a book that provides so much clarity on the history of the chakras. Leland does not attempt to discredit the chakras – he simply provides us with a very detailed narrative tracing the history of chakras from tantra through to Madame Blavatsky and the Theosophical Society through to more recent healers such as Barbara Brennan. I will most definitely be discussing this book in a future blog because I found it so fascinating.

Today I want to talk about GDV, chakras and essential oils. Please be patient with me while I tell you a little about my past life – that is, my life before I discovered Traditional Chinese Medicine (TCM), aromatherapy and natural therapies. I graduated as an electrical engineer. I spent several years working as an engineer but I never felt comfortable or happy in this role. At the age of 22, I met an amazing individual who was an acupuncturist and homeopath who kindly spent time mentoring me in his clinic. Jan was more than happy to share his knowledge and clinical experiences with me. I was like a sponge soaking it all up! I knew I had finally found my calling in life. In the 1980s the industry was not very regulated, however, Jan advised me to seek out formal training. Being an electrical engineer, the concept of energy “Qi” made a lot of sense so I decided to study (TCM). For a while, I wanted to combine my electrical engineering skills with TCM and create devices to measure subtle energy and Qi.

In those days the internet did not exist, but somehow, I managed to get my hands on a document that described how to build Kirlian photographic equipment. I wanted people to see the Qi and I felt that Kirlian photography was the perfect way to do this. However, I must admit that my practical electrical engineering skills were not that good and the Kirlian photography equipment I tried to build never worked.

I then discovered aromatherapy and was in awe with the way my patients would respond to essential oils in such a positive way to most emotional and spiritual crises that would often also manifest as physical ailments. This inspired me to pack my bags for the UK and study aromatherapy under the world-renowned Madame Micheline Arcier. The rest is history.

At an integrative medicine conference in Japan, where I was speaking and launching the Japanese edition of The Complete Guide to Aromatherapy, I met a very interesting guy who had a big queue of people lining up to have their energy field photographed using a device called the Gas Discharge Visualization technique (GDV).

Maeba san was so busy, so I never had a chance to have my aura photographed at the conference. We exchanged business cards and he kindly invited me to his office as he was also very interested in essential oils and wanted to do some research into the effects of essential oils on our energy field.

I was so excited to meet with Maeba san in his office. He briefly explained that the GDV was based on Kirlian photography technique, using the latest digital technology and software to map the entire body energy field. The GDV system was developed in Russia by Konstantin Korotkov, a physicist who is the senior research scientist at Saint Petersburg Federal Technical University. By the way, it is interesting to know that the equipment is also certified as a medical device by the Russian Ministry of Health.

We did not waste any time having my energy field measured. The process involved each of the 10 fingertips being photographed. Through a process of complex algorithms, the entire body energy can then be determined to create an image of the entire aura. He described my aura (figure 1) as the strongest he had ever seen. 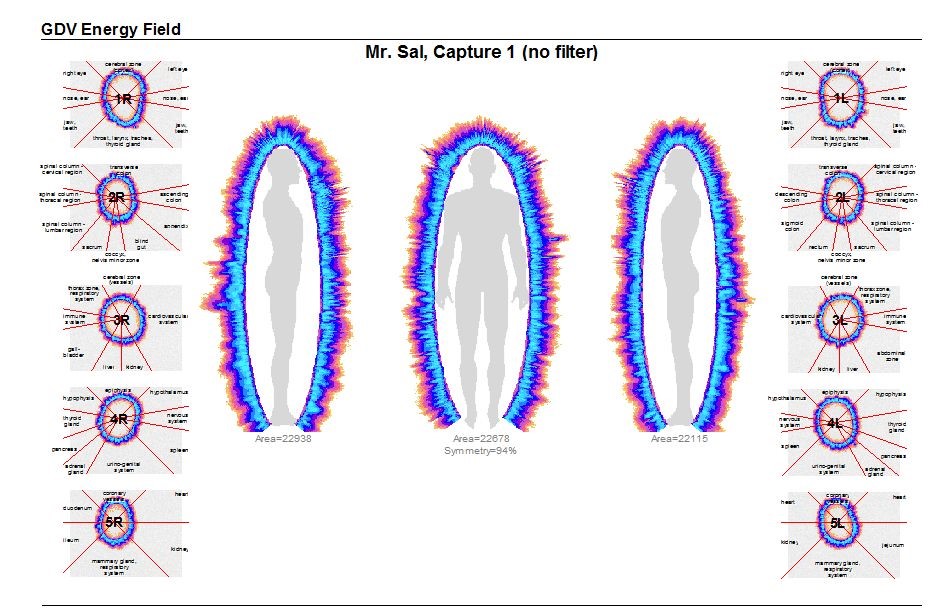 The skill is not just in measuring the aura, but in interpreting the results. The energy state of each organ can then be determined, identifying health problems. The GDV software can also estimate the energy of each chakra by graphically displaying their level of activation and balance (see figure 2); on this particular day my chakras were perfectly balanced. 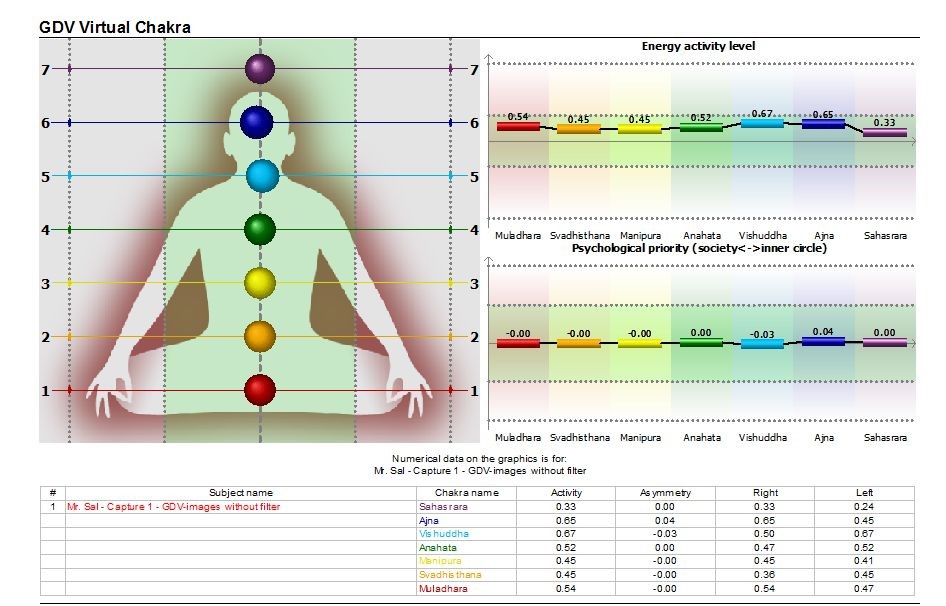 In one individual, we were able to determine the activation of each chakra centre. From figure 3 you can see that the smaller the circle, the weaker the activation, and the further displaced from the centreline, the more out of balance the chakra energy centre is.

In this individual on this particular day, there were so many emotional, stressful events occurring. We then asked the participant to inhale their favourite oil, which happened to be a Perfect Potion special blend of 23 essential oils called Green Goddess Blend. After a few minutes, the GDV was done again and we were so surprised to see how the chakra energy centres became much more balanced. See figure 4.

Not surprisingly, the participant reported feeling calmer after inhaling the blend, but what is so amazing is how her chakra energy centres became more balanced and more aligned.

One of the obvious questions I am often asked is how long does this last? The individual did feel more relaxed and calmer for the rest of the day. However, I agree, more studies need to be done using GDV to thoroughly investigate how long the essential oils can influence the energy field and the chakra energy centres.

GDV is one of a few techniques that can be used to identify the energetic impact of essential oils on our energy field. Using GDV analysis we can become better aware of our emotional states and how they influence our energy centres.

The knowledge that we now have of chakras has slowly developed over a long period. The chakras are often referred to as centres of consciousness and using devices such as GDV, we can learn to understand how essential oils can be used to help balance our subtle energy and to raise our level of consciousness. I am so looking forward to writing much more about essential oils and their effect on our subtle energy.